Meet the experienced and friendly doctors and staff who make Walter M. Yamamoto, O.D. the leading provider of vision care products and services in Aiea. 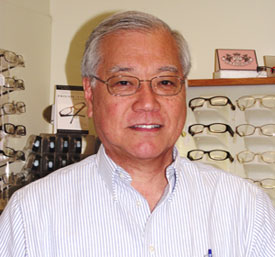 Walter M. Yamamoto, O.D., graduated from Kahuku High School and the United States Air Force Academy in Colorado. He received a Bachelor of Science degree in International Affairs (Political Science) and an officer’s commission. While on active duty in the Air Force, he was an intelligence officer with assignments overseas and in the U.S. After leaving active duty, he worked as a Professional Sales Representative with Pfizer Pharmaceuticals in Hawaii where he was introduced to the health care field. Deciding to become an optometrist, he attended the University of Hawaii, Manoa where he received a Bachelor of Arts degree in Biology. He then attended Pacific University College of Optometry in Oregon where he received a Bachelor of Science degree in Visual Science and a Doctor of Optometry degree.

He practiced with Worldster Lee, M.D. at the Cataract and Retina Center of Hawaii, as well as with Stanley Yamane, O.D. and Dennis Kuwabara, O.D. at Eye Care Associates of Hawaii. He then assumed the practice of Paul Yamada, O.D., the first eye care practitioner in Aiea, where he strives to provide quality and personalized eye care for his patients.

You can schedule your next eye exam with us online!